We won't try to do justice to Star Wars in a few paragraphs of a quiz website. It just can't be done. Suffice it to say that, since the debut of the first film, Star Wars, in 1977 (now subtitled Episode IV: A New Hope), not many movie franchises have so captured fans' hearts and imaginations worldwide.
Happily for fans, a decade-long production hiatus ended in 2015 - and the "trilogy of trilogies" created by George Lucas has been making up for lost time. Episodes VII and VIII, The Force Awakens and The Last Jedi, were finally released to ecstatic fanfare in 2015 and 2017. And as most fans know, Episode IX is planned for a 2019/2020 release. (You can't wait? We can relate!)
This section has more than 150 quizzes covering all the Star Wars movies, created to test novices and nerds alike. THAT should keep fans busy for a while! Try a few quizzes now - and may the force be with you as you do!

Are you a true Star Wars fan? 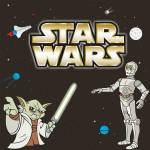 Call yourself a Star Wars fan? Well, if you really are, take the ultimate Star Wars test! When it comes to knowing this franchise, find out now whether you're as thick as Jar-Jar Binks or as wise as Yoda!

How well do you know Star Wars?

Are you just now getting into Star Wars? Better late than never! There's a lot to know about this amazing franchise. Here's an easy Star Wars trivia quiz for you to try - see how much you know right now!

This is a quiz about Star Wars. It should be very easy if you know Star Wars well.

How much do you know about STAR WARS?

Do you like the Star Wars saga? Do you wish people luck by saying 'May the force be with you'? Do you worship George Lucas? If you got one of these answers as YES then try this quiz.

Connect the line to the film and the character

Are you a Star Wars freak?

Have you read the book, seen the movies, bought merchandise, or even dressed up as a Star Wars character? You may be a Star Wars Freak. Take this test and find out!